Detecting authentication bypasses in firmware is challenging for several reasons:

To reason about these vulnerabilities, we created a model based on the concept of input determinism. Our authentication bypass model specifies that all paths leading from an entry point into the firmware to a privileged operation must validate some input that the attacker cannot derive from the firmware image itself or from prior communication with the device. In other words, we report an authentication bypass vulnerability when an attacker can craft inputs that lead the firmware execution to a privileged operation. 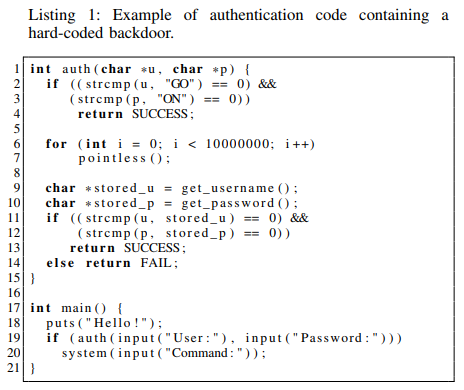 The example is a user-space firmware sample with a hardcoded backdoor, wihch is the check in lines 2 and 3. The security policy provided to Firmalice is: “The Firmware should not present a prompt for a command (specifically, output the string “Command:”) to an unauthenticated user.” 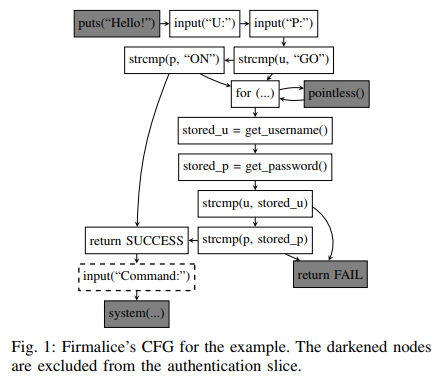 Firmalice first loads the firmware program and carries out its Static Program Analysis. This results in a control flow graph and a data dependency graph. The latter is then used to identify the location in the program where the string “Command:” is shown to the user. This serves as the privileged program point for Firmalice’s analysis.

Firmalice utilizes its Static Program Analysis module to create an authentication slice to the privileged program point. The extracted authentication slice is then passed to Firmalice’s Symbolic Execution engine. This engine explores the slice symbolically, and attempts to find user inputs that would reach the privileged program point. In this case, it finds two such states: one that authenticates the user via the backdoor, and one that authenticates the user properly.

As these privileged states are discovered, they are passed to the Authentication Bypass Check module. In this case, the component would detect that the first state (with a username of “GO” and a password of “ON”) contains a completely deterministic input, and, thus, represents an authentication bypass.

Firmware takes one of two forms:

Firmalice supports a wide range of processor architectures by carrying out its analyses over an intermediate representation (IR) of binary code.

Firmalice identifies the expected location of a binary-blob firmware in memory by analyzing the relationship between jump table positions and the memory access pattern of the indirect jump instructions.

The policies that Firmalice supports:

The first step in creating a PDG is the creation of a CFG. Firmalice creates a context-sensitive CFG by statically analyzing the firmware, starting from each of the entry points and looking for jump edges in the graph.

To increase the precision of its CFG, Firmalice utilizes forced execution to systematically explore both directions of every conditional branch. When it encounters a computed or indirect jump, Firmalice can leverage its symbolic execute engine to reason about the possible targets of that jump.

We use a context sensitivity of 2 when generating the CDG, which allows Firmalice to reason about not only the basic block that needs to execute so that a given statement is reached, but also the call context from which that basic block must be executed. The CDG is generated via a straightforward transformation of the CFG.

Using the PDG, Firmalice can compute backward slices. That is, starting from a given program point, we can produce every statement on which that point depends.

The implementation of this module of Firmalice follows ideas presented in Mayhem, adding support for symbolic summaries of functions, to automatically detect common library functions and abstract their effects on the symbolic state.

Firmalice’s symbolic analysis works at the level of symbolic states. Whenever a path reaches the privileged program point, its associated state is labeled as a privileged state and passed to the Authentication Bypass Check module for further analysis, based on constraint solving.

Firmalice adopts the concept of “symbolic summaries”, which involves descriptions of the transformation that certain commonly-seen functions have on a program state. A symbolic summary acts in the same way as a binary instruction: it consumes an input state and produces a set of output states.

Given an privileged state from the Symbolic Execution engine, the Authentication Bypass Check module identifies the input and output from/to the user and reasons about the exposure of data represented by the output. It then attempts to uniquely concretize the user input. If the user input can be uniquely concretized, then it represents that the input required to reach the privileged program point can be uniquely determined by the attacker, and the associated path is labeled as an authentication bypass. At this point, Firmalice terminates its analysis. In cases where the user input depends on data exposed by the device’s output, a function that can generate valid inputs for a provided output is produced.

The core intuition of our approach is that data seen by the user, via an output routine, is exposed to the attacker. Specifically, this exposure does not just reveal information about the output data: information is also revealed about any data that depends on or is related to the output. The attackers can deduce information about authentication credentials by observing program outputs.

For each privileged state, Firmalice attempts to concretize the user input to determine the possible values that a user can input to successfully reach the privileged program point. A properly-authenticated path contains inputs that concretize to a large set of values. Conversely, the existence of a path for which the input concretizes into a limited set of values signifies that an attacker can determine, using a combination of information within the firmware image and information that is revealed to them via device output, an input that allows them to authenticate.