A core intuition behind the design of Driller is that applications process two different classes of user input: general input, representing a wide range of values that can be valid, and specific input, representing input that must take on one of a select few possible values. Conceptually, an application’s checks on the latter type of input split the application into compartments. Execution flow moves between compartments through checks against specific input, while, within a compartment, the application processes general input.

Driller is composed of multiple components： 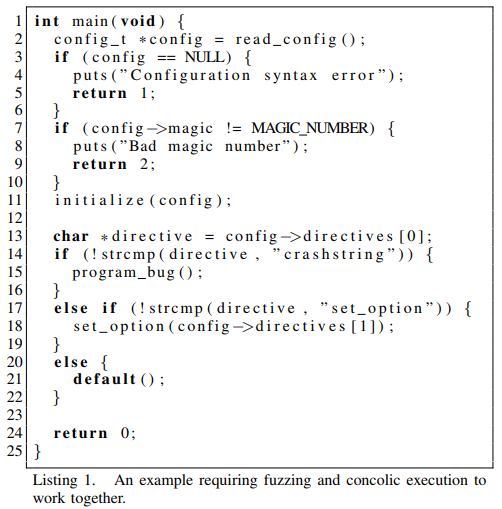 In this example, the application parses a configuration file, containing a magic number, received over an input stream. If the received data contains syntax errors or an incorrect magic number, the program exits. Otherwise, control flow switches based on input between a number of new compartments, some of which contain memory corruption flaws.

To implement Driller, we leveraged a popular off-the-shelf fuzzer, American Fuzzy Lop (AFL). Our improvements mostly deal with integrating the fuzzer with our concolic execution engine. Since instrumentation that AFL relies on can be either introduced at compile-time or via a modified QEMU, we opted for a QEMU-backend to remove reliance on source code availability.

Because fuzzers randomly mutate input, and genetic fuzzers, in turn, mutate input that has, in the past, generated unique paths through a binary, they are able to quickly discover different paths that process “general” input. However, the generation of “specific” input to pass complex checks in the application is very challenging for fuzzers.

Driller aims to complement the fundamental weakness of fuzzing, determining specific user input required to pass complex checks, by leveraging the strength of concolic execution. When the fuzzing component has gone through a predetermined amount (proportional to the input length) of mutations without identifying new state transitions, we consider it “stuck”. Driller then retrieves the inputs that the fuzzer has deemed “interesting” in the current compartment and invokes the concolic execution engine on them.

The fuzzer identifies inputs as interesting if one of two conditions holds:

We leveraged angr for Driller’s concolic execution engine. The engine is based on the model popularized and refined by Mayhem and S2E.

Driller’s symbolic memory model can store both concrete and symbolic values. It uses an index-based memory model in which read addresses may be symbolic, but write address are always concretized. This approach, popularized by Mayhem, is an important optimization to keep the analysis feasible.

In most cases, most of the work is offloaded from the concolic execution engine to the fuzzer, which will find many paths quickly, letting the concolic engine just work on solving the harder constraints.